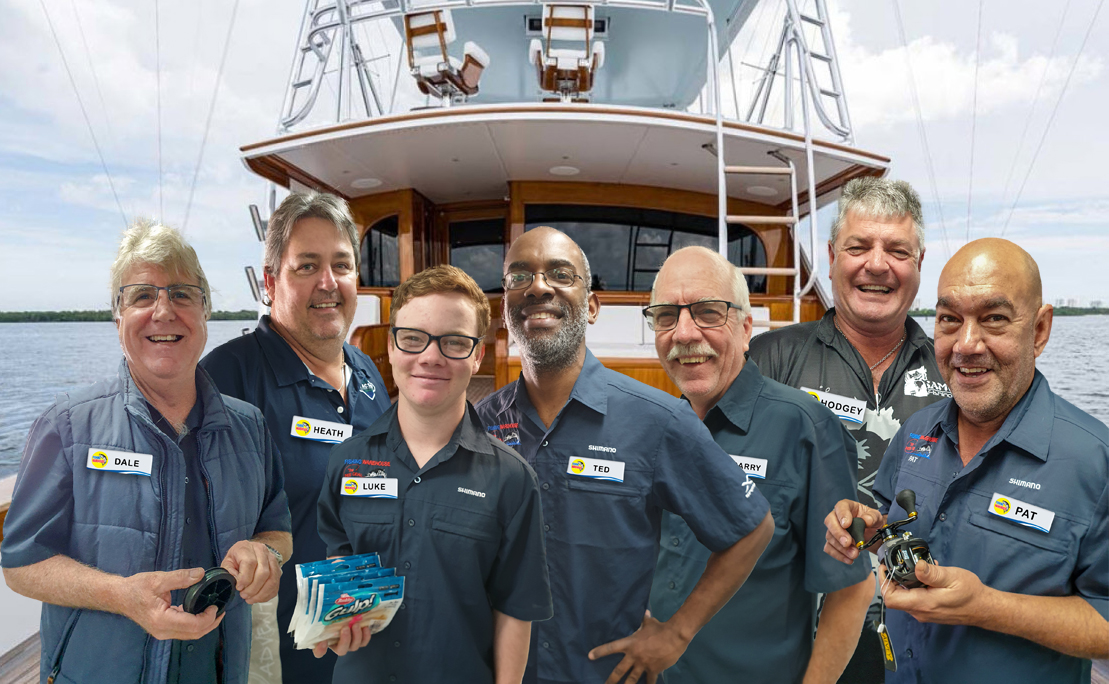 Co-owners Dale Welldon and Pat Dass enjoy more than 60 years combined experience in the North Queensland fishing tackle industry. Together, Dale and Pat have hand-picked some of the regions most passionate and successful anglers to complete Team Fishing Warehouse. Specialising in all facets of fishing including lure-casting, flyfishing, bait, estuary, inshore, bluewater, game and reef fishing, this team of dedicated and knowledgeable anglers offer supreme service and advice to Fishing Warehouse customers. It's no accident then that the Fishing Warehouse remains Townsville's leading bait and tackle outlet catering for both novice and experienced anglers alike. Meet TEAM FISHING WAREHOUSE...

Co-Owner Manager
Finding his way to Townsville in the mid-eighties, Dale Welldon, a sparky by trade, opened his first bait and tackle store on Ross River Road. The Tackle Shack was the spark that lit a fire – one that’s been burning brightly ever since and fueled by Dale’s undeniable passion for fishing and the fishing tackle industry. Dale has spent plenty of time over the years doing the game fishing thing – and very successfully too. But these days, as FISHING WAREHOUSE Co-owner, Dale derives special enjoyment watching his grandchildren catch fish and ensuring satisfied customers leave his store with the biggest smiles on their faces.

Co-Owner Manager
FISHING WAREHOUSE Co-owner Pat Dass has been involved in the Townsville fishing tackle industry since the late 1980’s and during that time, he has gathered incredible product knowledge. Pat’s attention to detail and customer service is exemplary, so much so that customers will just continue browsing the extensive FISHING WAREHOUSE range of stock until they find he is free to help. And that queue can be a little longer than one might expect when Pat ensures each and every customer is treated to the best possible service and advice. It is fortunate then, that there are another half-dozen equally capable staff to help out!

Rod Repair Technician
Tedla Morgan is an integral part of TEAM FISHING WAREHOUSE. Ted has been around a bit and gathered plenty of fishing experience along the way – right across the globe in fact – the Jamaican born angler only to happy to share his extensive knowledge with our equally valued customers. Ted’s fishing passion is split equally between fly-fishing pursuits and his love of ultra-light tackle. And when Ted is not waving fur & feather or listening to the sweet drag on a little spin reel, he’s most probably giving a little love to a customers rod, most repairs and modifications undertaken by the skillful rod builder.

Young Gun Angler
Introducing Luke Neill, the latest addition to TEAM FISHING WAREHOUSE. A young man of already accomplished fishing skills, Luke, 17 is set for a career in the fishing tackle industry and he gets the best possible start at Townsville’s FISHING WAREHOUSE. Luke says there’s not a species that swims that he doesn’t want to catch, and that’s already evident with his accomplishments with rod and reel. Luke is a quiet young man but yahoo’s the loudest when he’ just landed a thumping 20 kilogram mackerel or set the hooks into a meter-long barramundi. Welcome to the team Luke. We’re sure you’ll fit in just nicely.

Expert Bait Angler
By his own admission, Garry ‘Crumpet’ Dunkley is the dinosaur among TEAM FISHING WAREHOUSE, but we suspect it’s a badge he wears with pride. Crumpet is well-known throughout the Townsville fishing and boating community, spending time in both industries since arriving from Melbourne nearly 30 years ago. Ask Crumpet about his adventures with his old mate Rex Hunt. Popular with customers both young and old, and loved for his weekly radio fishing reports, Crumpet is unselfish with advice – particularly about his favourite tropical species, grunter or barred javelin fish, although his fishing experience extends to all tropical sportfish species.

Reel Repair Technician
The bloke in the FISHING WAREHOUSE reel service and repair engine room is Heath Kerr, a local man and avid angler who has spent considerable time in the fishing tackle industry. But Heath knows about plenty more than just the working bits of a fishing reel. Estuary and inshore options have been Heath’s fishing preference for as long as he can remember, but that’s all changed in recent years, Heath finding an undeniable attraction to light tackle game fishing for small to mid-size marlin and sailfish. Heath is just one of several smiling faces to greet customers when the FISHING WAREHOUSE doors swing open.

Expert Lure Angler
David ‘Hodgey’ Hodge, aka The Barefoot Fisherman, knows plenty about all things estuary and lure-casting. Hodgey is the bloke most suited to CELEBRITY ANGLER status among TEAM FISHING WAREHOUSE. This affable fella is well-known on the fishing and boating show circuit and especially for his freakish casting abilities – which leads to equally freakish catching abilities! Originally from Tamworth, NSW, Hodgey did time on all things freshwater including XOS Murray cod, but these days is happiest dragging any amount of mangrove jack and barramundi from North Queensland tropical creeks and rivers.
The Fishing Warehouse on Facebook

Share on FacebookShare on TwitterShare on Linked InShare by Email

This winter has been unusually good for mudcrabs - probably one of the better 'off-seasons' for several years - so if you're not into the mackerel thing, why not set a pot for a feed of the tasty crustaceans⁉️ 🦀In stock NOW - COUCOM CRAB POTS✅Aussie made. ✅Split legs for easy assembly and hassle-free storage.✅Several sizes/models available.✅Bait holder standard in all models. ... See MoreSee Less

Share on FacebookShare on TwitterShare on Linked InShare by Email